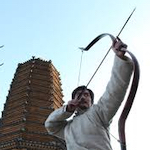 Suddenly we find our guy bound and gagged in a monastery. The monks found him in a rage, blaming himself for not being able to stop the attack on his sister. They perform a ritual for him to be reborn, telling him “When you jump over the wall, the words spoken by the first person you meet will be your new name.” On his journey he hears someone yelling “Judge Archer!” followed by gun shots, so when an old monk hiding in the bushes asks him his name he says, “Judge Archer.” END_OF_DOCUMENT_TOKEN_TO_BE_REPLACED