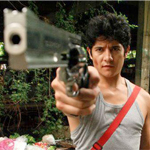 Actually, at this point it switches to KICKBOXER. Young Manit trains on roped posts and hanging coconuts, aging to adulthood (and the actor Jon Foo) during a montage. They even do the scene where the teacher takes him to a bar and convinces a bunch of toughs that he talked smack about them so he’ll have to fight them off. The fight is done in an interesting, partially successful handheld POV type approach. END_OF_DOCUMENT_TOKEN_TO_BE_REPLACED