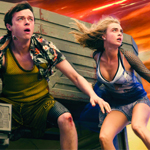 And it continues like that, a two hour, 17 minute non-stop kaleidoscope-fantasia-carnival-parade of colorful creatures and planets and space ships and gimmicks inspired by the comics series Valérian and Laureline (1967-2010). The titleistical City of a Thousand Planets (Alpha for short) is a gigantic space station that started out by uniting representatives of every country on Earth, but kept expanding to encompass alien cultures. And since much of the movie takes place on this multi-species megalopolis, this intergalactic Epcot Center, it’s like a marathon of STAR WARS cantina scene after STAR WARS cantina scene. END_OF_DOCUMENT_TOKEN_TO_BE_REPLACED