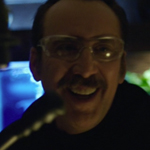 Most of Cage’s movies are pretty serious, even if he’s funny in them. THE TRUST has an actual sense of humor. It opens with another character, Waters (Elijah Wood, GRAND PIANO), laying in bed, staring blankly. Then we see that a blond hooker is riding him. He’s not into it. He’s staring at a mole under her breast. Afterwards he’s leaving cash on the bedside table and we see him consider taking back one of the tens. But then he gives it to her. So he’s not too bad. END_OF_DOCUMENT_TOKEN_TO_BE_REPLACED