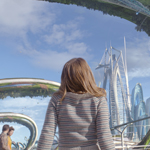 One kid named Frank (Thomas Robinson as the kid version of George Clooney) goes there to try out his home-made jetpack. Another named Casey (Britt Robertson, SCREAM 4) is intrigued by their space program. The crew she sees going on a spaceship are young enough to be dropped off by their parents. At least half of them are women and I think only one white kid. The movie’s dedication to diversity and internationalism seems very of-the-moment, but it also relates to one of Tomorrowland’s secret entrances: inside the original 1964 World’s Fair version of It’s a Small World. Wait a minute, It’s a Small World is in Fantasyland, not Tomorrowland. Get your fuckin geography straight, Hollywood. END_OF_DOCUMENT_TOKEN_TO_BE_REPLACED