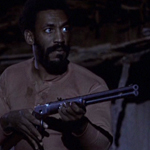 I mentioned Jubal ’cause that’s the name of their horse. Being the Cliff Huxtable of the Old West, Cosby is a horse doctor who is going to put some white guy’s injured horse down, but then his son Billy (George Spell, THE NAKED KISS) cries so much he makes a deal with the farmhand or whatever to take the horse if he can get it to walk. It’s like WAR HORSE for a minute, they nurse Jubal back to health and then force him to haul a giant boulder. These people in movies sure do talk a big game about how much they love a horse before they enslave and torture the poor thing. No wonder those big bastards dream of one day fucking all of mankind to death, yelling “Remember Enumclaw!” (see ZOO). END_OF_DOCUMENT_TOKEN_TO_BE_REPLACED