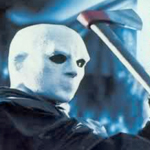 Gerald (Barton Faulks, FUTURE-KILL) is a young man who rides a motorcycle, so he’s a rugged individualist, but he wears a helmet, so he’s unusually safety conscious for a movie character of the time. He just bought a new computer and he’s excited about it, so he’s also a genius or a nerd or something. He works as an exterminator with his buddy Richard Simmons (Page Mosely, GIRLS NITE OUT) who is not the famous aerobics instructor, but a tail-chasing jock dude who wears bodybuilding shirts and plays darts. END_OF_DOCUMENT_TOKEN_TO_BE_REPLACED