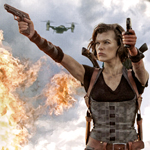 Okay, the explanation is always clones. Clones are the reason Michelle Rodriguez and Oded Fehr, whose characters died in previous chapters, are suddenly back as different people. Multiple different people. For a while it seems like Rodriguez came back to the series after a ten year absence just for a comically brief cameo where she gives Alice a ride and then crashes 30 seconds later. Then Alice is killed by a zombie. END_OF_DOCUMENT_TOKEN_TO_BE_REPLACED