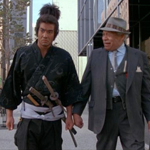 By the time the man in charge, Dr. Alan Richards (John Calvin, Tales of the Gold Monkey, CRITTERS 3), recruits “Oriental history” expert/narrator of the film Chris Welles (Janet Julian, HUMONGOUS, FEAR CITY, KING OF NEW YORK) to consult, she’s already read rumors about “The Frozen Shogun” in the newspaper, but just thinks it’s an archaeological discovery. It’s immediately clear that Dr. Richards is an asshole because when she walks into the lobby to report to the job he’s standing right next to her and doesn’t bother to welcome her, introduce himself or even look at her. Then he pulls a John Hammond and brings her for a tour without warning her there’s gonna be a live samurai involved. END_OF_DOCUMENT_TOKEN_TO_BE_REPLACED