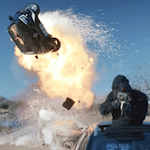 Okay, so Areski (Nicolas Duvauchelle, TROUBLE EVERY DAY) was the one who set Lino up. Marco (Sebastien Lalanne, THE SQUAD) is a co-conspirator who killed his brother. Julia (Stefi Celma, also from THE SQUAD, as is most of this cast, actually) is his badass colleague on the go-fast team and girlfriend. Moss (Pascale Arbillot, MY DOG STUPID) is the other cop who figured out he was innocent. And Charas is not in this one because he died, but he’s Lino’s mentor who is constantly discussed. END_OF_DOCUMENT_TOKEN_TO_BE_REPLACED 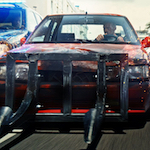 It opens with Lino (Alban Lenoir, an actor/writer/action coordinator/second unit director on a show called Hero Corp), a mechanic, preparing a souped up engine on a small car and nervously strapping himself in, steeling himself for a crash. He picks up his Eddie-Furlong-looking little brother Quentin (Rod Paradot, STANDING TALL) and hands him a helmet, and we realize he’s planning to ram through the side of a jewelry store. Quentin tries to talk him out of it, thinking there’s no way they’ll make it through that wall in this little thing. But Quentin has a huge debt of some kind and Lino thinks this is the only way to save his ass. END_OF_DOCUMENT_TOKEN_TO_BE_REPLACED