Toolbox Murders and the reclamation of Tobe Hooper

Happy Halloween, everybody! Several  years ago I started an annual tradition of  challenging myself to write about on an all-time horror classic, probing deep into what makes it great and/or meaningful to me at that moment in time. This year I decided to do it a little different and point my flickering flashlight at one of the less respected films by a certified Master of Horror. 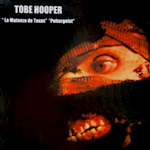 In 1974, in Austin, Texas, a former college professor and indie-film tinkerer suddenly made one of the greatest horror movies of all time. THE TEXAS CHAIN SAW MASSACRE was produced independently for $140,000, with unknown local actors, and released through a mafia-owned company founded to distribute DEEP THROAT. But it was great, and it became a long-running hit, and it shot the name ‘TOBE HOOPER’ across a trail of drive-in screens straight into Hollywood. It inspired Wes Craven to make THE HILLS HAVE EYES, Ridley Scott called it the biggest influence on ALIEN, Steven Spielberg liked it so much he recruited Hooper to direct POLTERGEIST. It got Hooper noticed, and within a few years he was in L.A. filming his next Texas-set indie EATEN ALIVE on a Hollywood soundstage with famous actors.

Nearby, aspiring producer Tony Didio read in the trades about the ongoing success of CHAIN SAW as it was re-released each year. Thinking he would like to make some money too, he screened the movie for some writers and told them to make him something like that. The result was THE TOOLBOX MURDERS, which was released in 1978 to scathing reviews and modest profit, became notorious as one of the “Video Nasties,” and at least had a title recognizable to horror fans.

A quarter century later, things were very different. Hooper hadn’t made a well-received movie since the mid-‘80s, and that’s only if you count the once-divisive LIFEFORCE or THE TEXAS CHAINSAW MASSACRE 2 as well-received. If you don’t you gotta go back to POLTERGEIST, which many try to deny Hooper credit for. In 2003 CHAIN SAW was remade by Michael Bay’s production company, with Hooper’s blessing (and co-producer credit) but little involvement. He’d mainly been directing for quickly forgotten TV shows like The Others, Night Visions and Taken. As far as the popular consciousness was concerned he only existed in the past. He’d disappeared.

Didio had produced half a dozen films since his horror debut, none of them well known. According to Fangoria’s 2004 coverage, Jim Van Bebber (DEADBEAT AT DAWN) approached the producer with a spec script for a TOOLBOX MURDERS sequel (I would’ve liked to see that!), so Didio commissioned him to write a remake too. But when Hooper himself came aboard to direct the remake of his own rip-off, he brought in Jace Anderson & Adam Gierasch (CROCODILE, DERAILED, MOTHER OF TEARS) to write a totally different script. Taking the idea of a guy in a ski mask drilling people in an apartment building and surrounding it with so much more, Hooper didn’t so much remake THE TOOLBOX MURDERS as cut off its title and wear it as a mask. END_OF_DOCUMENT_TOKEN_TO_BE_REPLACED