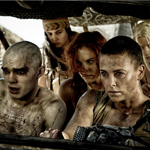 The most annoyingly contrarian review I’ve seen passed around is “Actually, Mad Max: Fury Road Isn’t That Feminist; And It Isn’t That Good, Either” by Eileen Jones, a college professor and author of a book called Filmsuck, about how films suck. Some of her reasons why it’s not that feminist: the Wives are played by models, Charlize Theron has a “soft, tiny-nosed, blonde prettiness,” the consultant Eve Ensler couldn’t possibly know what it’s like to be Bosnian or Afghani. I was confused by her complaints of the “gorgeous color, red rock and rich umber sand against heartening blue sky,” which she feels is an example of “the scourge of color grading that’s afflicting so many action films.” I’m gonna have to get some action movie recommendations from her I guess because I haven’t seen enough of these Technicolor ones she’s so tired of. END_OF_DOCUMENT_TOKEN_TO_BE_REPLACED