I didn’t hear about this until last night, but apparently Garry Shider, guitarist, musical director and singer for Parliament and Funkadelic, died on the 16th. He had cancer of the brain and lungs and died at home in Maryland. He was only 56.

Garry was a great guitar player and he also sang lead vocals on some of P-Funk’s greatest anthems, including “One Nation Under a Groove” and “Standing On the Verge of Getting It On.” The song he played at virtually every show was the beautiful “Cosmic Slop.” Turns out he didn’t write it, but I always thought of it as his trademark song. Despite the psychedelic title it’s a heartwrenching story from the point-of-view of a kid whose mother resorts to prostitution to feed her kids, and every night he hears her praying for forgiveness.
Here’s an absolutely smokin rendition I found on youtube. Garry’s the, uh, guy with the gold wings and the diaper singing lead vocals:

Garry grew up in Plainfield, New Jersey and hung out at George Clinton’s barber shop, where the doo wop group The Parliaments was formed. Garry wasn’t a Parliament, but he moved to Canada and started the band United Soul when he was still a teenager. Clinton later produced them as “U.S. Music with Funkadelic.” Their songs “I Miss My Baby”…

and “Baby I Owe You Something Good”

…soon became Funkadelic tunes, and Garry and his bandmate Cordell “Boogie” Mosson joined the group too.

Oh yeah, Garry sang the lead on one of my all time favorite underrated Funkadelic tracks, “I’ll Stay.” Check this shit out:

I’ve seen the P-Funk All Stars a ridiculous number of times over the years, as recently as a couple of months ago. I wasn’t there from the beginning, but long enough to see their touring band transmutate and metamorphose. There were the days when they still had the great guitarist Eddie Hazel, but then he died. There was the time when Maceo Parker and Fred Wesley were still leading their horn section. When George’s son Trey Lewd would be there doing a song called “Yank My Doodle.” And when he decided to teach his limo driver “Babblin’ Louie Kababbie” how to rap to prove he could make anyone funky. Keyboard mad genius Bernie Worrell came back for a while, then went off on his own again. Blackbyrd McKnight (also a member of Herbie Hancock’s Headhunters) and Andre “the guy in the wedding dress” Foxxe were there for many years, then went their separate ways. The younger generation of P-Funkers picked up in the early ’80s, like kung fu suit wearing bassist Lige Curry, became the veterans leading still younger members, like George’s granddaughter Sativa who George looks alternately proud and embarrassed of as she raps about marijuana and dicks. There was a period around 2004, doesn’t seem like long ago yet, when they picked up some new female singers, had a violinist named Lili Haydn playing the shit out of “Maggot Brain,” and were tighter and fresher than I’d seen them in years. At recent shows they’ve gotten messier, cut down the band, sometimes with no horns, at least once with near-disastrous results, but it was still kind of a religious experience to have their sounds wash over me.

And at every one of those shows Garry was there in his diaper with his big outie bellybutton on display, singing his Gospel lungs out. Don’t worry, he wasn’t one of those perverts who gets off on wearing diapers, he just didn’t give a fuck what anybody thought of him. And he must’ve thought it was funny. If you can sing a song that brings tears to people’s eyes even though they can see you standing there, a man in your 50s, wearing a diaper, then you know what the fuck you’re doing.

I’m not sure how they’ll do it without him. I’m sure they’ll figure out a way. But it’s not gonna be the same. I’ll miss him. Rest in peace Garry Shider. 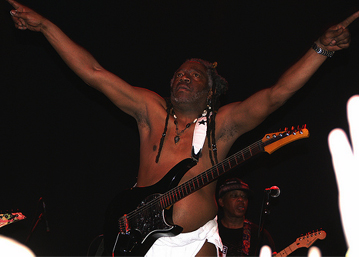 music
This entry was posted on Wednesday, June 23rd, 2010 at 1:10 am and is filed under Blog Post (short for weblog). You can follow any responses to this entry through the RSS 2.0 feed. You can leave a response, or trackback from your own site.