Hey, how about a PG-13 possession movie from Michael Bay’s remake outfit Platinum Dunes? What better way to show he means business? Hooray! 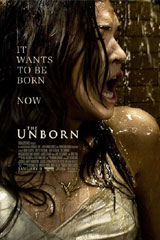 Actually, despite all indications, this isn’t that bad. I think it has moments of greatness and that it has more thrills and imagination than most modern horror movies. As a director Goyer’s much improved. He’s got atmosphere and suspense and organically works in some really inventive digital (and sometimes rubber) monstrosities. I think he must’ve been working real hard on the directing though and didn’t get a chance to read over the script after he got to the end.

The idea’s not bad. It’s a Jewish version of THE EXORCIST. The lead (who looks too much like a model, but does fine anyway) has a weird experience with a goofy looking 4-year old she’s babysitting. He tells her “Jumby’s ready to be born” and hits her. After much hallucination and medical, paranormal and historical research she unravels a convoluted backstory involving her unborn twin, her secret grandma’s unborn twin, The Holocaust, and demonic possession. The script relies way too much on the grandma doing spooky narration to explain all the history and rules of the demonic business, and the more she gets into the story the more laughable it gets. It’s just too corny and convenient for her to explain everything, and I challenge you to still be taking it seriously by the time she gets to the part about Nazis doing experiments to turn brown eyes blue. It’s just too much and it’s not like DRAG ME TO HELL where it has a straight face but won’t mind if you laugh. This one invokes Auschwitz. It’s serious.

Plus, she learns that her parents never told her she was a twin, and that they would’ve named her unborn brother Jumby. And she doesn’t ask what the hell kind of name “Jumby” is other than a name out of some kid’s campfire ghost story. Who names their kid that? And then her is name is Casey. You know, the Beldon twins. Casey and Jumby Beldon. The poor kid goes to school, everybody’s saying “Mecca lecca hi mecca hiney ho,” asking him to grant their wishes.

(I talked to someone else who saw the movie and he said that Jumby was not their name for the kid but their nickname for the fetus. I can’t figure that one out either if that’s true.)

Okay, the more I think about it the more I think most people will hate this, and I can’t blame you. But let me just say this in its favor: it satisfies in the Crazy Fucked Up Shit department, a department ignored by many of today’s bland horror movies. I watched the unrated DVD cut but if it’s anything like most unrated cuts it’s probaly not too much more extreme than what they showed in theaters. If I’m right about that it shows that they’re really finding ways to work around the PG-13 rating, same way they work around any form of organized censorship. They’re not gonna get away with saying fuck two times or showing any pubic hair, but they can give your kids night terrors until they’re old enough to vote. They’ve really pushed the PG-13 rating in THE DARK KNIGHT, DRAG ME TO HELL, and I think WAR OF THE WORLDS might be the one that started this, that was pretty god damn harsh for your thirteen year olds. That’s kinda funny too because they created the PG-13 rating because they thought Spielberg was going too far with PG. Maybe they’re gonna have to create PG-15 for him and David Goyer.

Anyway, THE UNBORN starts with a great dream sequence: she’s out for a jog or walk or something, and she sees a kid’s glove abandoned on the concrete. Then she notices a ghoulish kid standing in the street, missing a glove. She looks at him, creeped out, afraid to say anything. Next thing you know he’s not a kid, he’s a dog standing there wearing a mask of a kid. (maybe she wasn’t looking closely enough at first.) She follows the dog into some woods, finds the mask abandoned in some wet leaves, so naturally she starts digging a hole with her bare hands and finds a monstrous dead-looking fetus. And then its eyes open.

It’s a great scene, like something out of the first NIGHTMARE ON ELM STREET, when the dreams were still surreal and not gimmicks. And the dog reminded me of that human-faced dog from part 2 that I forgot about until last time I watched it. My favorite part. We see other things throughout the movie, sometimes hallucinations, sometimes real: swarms of bugs, bugs crawling out of eggs (ooh, birth symbolism), a pitbull with an upside down head, an old man who contorts his body into a weird bug shape, a face that’s mostly teeth. Lots of new ideas for disturbing imagery, not just the old standbys. They got Gary Oldman and Idris Elba to play exorcists for credibility, but it’s these weird images that actually do the trick.

I’m not saying it’s a good movie, because I don’t think it is. But for the Platinum Dunes crime syndicate it represents a small step toward clean living. As far as I know it is not only their first non-remake but also for the first time employing the use of the human imagination. You (and especially they) could do worse than THE UNBORN.

David S. Goyer Gary Oldman Platinum Dunes
This entry was posted on Thursday, July 9th, 2009 at 12:08 am and is filed under Horror, Reviews. You can follow any responses to this entry through the RSS 2.0 feed. You can skip to the end and leave a response. Pinging is currently not allowed.

15 Responses to “The Unborn”