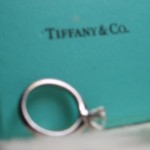 This review might as well be part of an ongoing FOR GOD’S SAKE, SOMEBODY PUT THIS OUT ON DVD series. I found it for rent on VHS and before I was even done watching it I was so impressed I stopped it and went online to see if I could order a used copy. There was exactly one on half.com, but for $60. Only one copy on ebay, and it was $100. So most of you will have to see it some day in the future if it’s ever released on DVD [UPDATE FROM THE FUTURE: it has since had a small DVD release], or chopped up into little files on youtube or something. But it will be worth it.

80 BLOCKS FROM TIFFANY’S is an amazing 1979 documentary about New York Street gangs The Savage Skulls and The Savage Nomads. I read somebody claiming somewhere that it was an influence on THE WARRIORS, and I believe it. It made me realize that as exaggerated as that movie was, it wasn’t as exaggerated as I thought. These are gangs who wear Nazi storm trooper helmets in public. There’s a guy with a cowboy hat and a bright red bandana over his face. They have names like Comanche, Fly and Crazy Joe. You see them practicing high-flying karate kicks, climbing up the side of buildings, jumping from fire escapes.
There’s a couple funny re-enactments showing how they steal TVs from apartments and hijack shipments from delivery trucks. 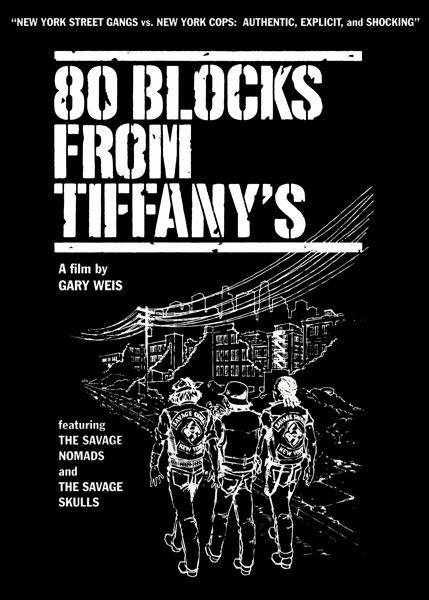 But mostly it’s just a movie where they leave the camera running for a long time and let these guys talk. In one or two spots it can get tedious as it illustrates the type of shit they are obsessed with (it wasn’t fair that we got arrested that one time, we didn’t do anything), but other times it’s great that the filmatists just let the film keep running. My favorite scene is where two guys have a long negotiation about the fight they plan to have. The bigger guy wants to fight now but the smaller guy refuses because his leg is hurt. The bigger guy promises not to hit the injured leg, but the smaller guy says he needs it “to dance around.” Then the big guy offers to wrap a belt around his legs to make the fight fair, but the small guy thinks that would be unfair to the big guy. They agree to have the fight two Fridays from now, after quibbling about whether or not that means the last Friday of this month. After the scene cuts we learn that their fight was punishment for the small guy allegedly trying to keep people’s change after going to buy food for them. (He swears he didn’t, and that he even showed them the receipts.)

Most of the movie is spent with the current gang members, but there are also interviews with former gang members (who seem more scary than the current ones), members of the community who know them, and an anti-gang unit cop. He’s an interesting character because he seems to kind of like the gangsters and they kind of like him. He even comes to the same block party as them and hangs out. He and one of the gang kids have a fairly laidback conversation about their willingness to shoot each other in a hypothetical scenario. I’m not sure about that guy though, he’s such a hotshot, it’s hard to believe he’s a clean cop. Like in the scene where he introduces two of the former gang members he’s laughing about them never being convicted of murders and arsons and shit, saying “nothing was proven.”

The main thing I like in a good documentary is an interesting character, somebody who is unusual but kind of relatable, maybe has a funny way of talking, maybe surprises you in some way. That’s everybody in this movie. One good one is the older former gang member and club owner they talk to. The scene that really cracked me up is when he’s talking while driving around the neighborhood and comes across a bunch of kids spraying the street with a fire hydrant. Suddenly he pulls out an old fashioned microphone like he’s gonna do a radio show. His car has an intercom! He asks if somebody could do something about the water because “we’re filming here, I don’t want to break the film.”

The most unsettling part is that you like most of these guys, they’re funny and they’re kind of cool with their silly outfits. You kind of laugh about them robbing people and getting in fights, especially since they seem to go after each other more than outsiders. But then they’ll casually mention that they got in trouble for “raping somebody,” and there’s a scene near the end where one of the girl gang members has a cut on her face from her boyfriend and tries to explain why it’s okay.

It’s only about 65 minutes long (the 72 minute running time listed on the label includes all the commercials for ELEPHANT PARTS and THE PAUL SIMON SPECIAL and shit) but it’s a damn good 65 minutes. It’s just a great slice of life and a portrait of a particular place and time. And it proves that those shitty ’80s movies with the gangs in them at least weren’t wrong about them wearing denim jackets with the sleeves ripped off. Probaly should’ve given em helmets, though.

This entry was posted on Sunday, February 17th, 2008 at 11:30 am and is filed under Documentary, Reviews. You can follow any responses to this entry through the RSS 2.0 feed. You can skip to the end and leave a response. Pinging is currently not allowed.

3 Responses to “80 Blocks from Tiffany’s”