When critics talk about drawing a line… what are they talking about?

In 1974, Washington Post TV critic Tom Shales described The Texas Chain Saw Massacre as “the latest discouraging entry in a horror movie subgenre that might be called gorenography–films that strive not so much to shock or frighten as merely to sicken.” He wrote that “The Exorcist brought the cheap shocks to the mass movie market” and described a “post ‘Exorcist‘ era” where horror movies have “no characters of any depth to identify with or cheer on as the monster approaches; there is little if any cleverly contrived suspense; and the film quickly becomes not a who-dun-it but a who-gets-it-next.”

Thirty-three years later, The Texas Chain Saw Massacre is still one of the best horror movies ever made. It was even selected for preservation in the Library of Congress. And The Exorcist‘s reputation isn’t too shabby either. Yet somehow the sky has not fallen. Civilization continues unabated. The innocence of children and puppies remains intact. Horror movies still frighten as well as sicken and have characters to cheer on as they face cleverly contrived suspense, like Sally in The Texas Chain Saw Massacre. In short, Tom Shales didn’t know what the hell he was talking about, and he was wrong. 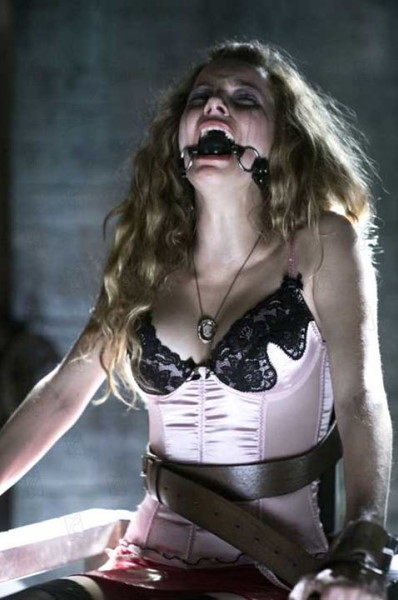 But those who do not learn the history of Tom Shales are doomed to repeat it. His blunder doesn’t stop today’s critics, talk-backers and morality experts from knowing for sure that these movies have finally after all these years gone too far. For real this time, no, seriously guys. And it all comes down to a line. A line that should not be crossed. Roger Ebert, usually a smart guy about horror, said of Wolf Creek “There is a line, and this movie crosses it. I don’t know where the line is, but it’s way north of Wolf Creek.” Box office predictor/movie columnist Dave Poland wrote in his review of the bootleg Hostel Part II work print that he watched part of in his hotel room that “There must be a line in this world and Hostel II crosses it at the more basic level of humanity.”

Okay, so apparently there’s this line. My question is, what is the exact latitude and longitude of the line? “Way north of Wolf Creek” could be anywhere. And I doubt that Ebert and Poland are talking about the same line that Shales would’ve drawn to protect “the old horror movies” from that foul-mouthed newcomer The Exorcist. Which line should we be using? The one people drew in outrage when Psycho came out? Or Night of the Living Dead? The ones they drew in the ’80s, like when Gene Siskel got mad about Friday the 13th movies or when all those parents thought the ads for Silent Night, Deadly Night were gonna traumatize children and ruin Santa Claus? And do we really think our children won’t laugh at us for having drawn this line in the future when they are trying to draw a line for the grandkids? Shouldn’t we just skip all that and not draw a line? 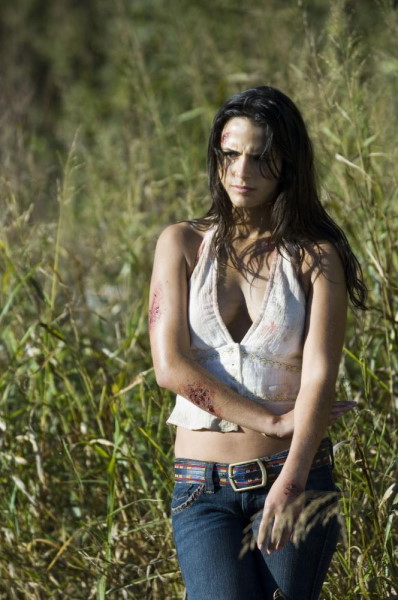 I can get worked up about our government using torture, and about people endorsing it. I can’t get worked up about what an evil puppeteer does in a horror movie. People like different things in horror. Some only like supernatural stories, some like more realistic. Some want to see the most graphic gore they can find, some want it all left to the imagination. Some prefer Freddy, some Jason, some both or neither. To most of us though the important thing is for the movie to be effective. I think Wolf Creek is effective — you get to know the characters; they feel real, and so it’s upsetting when bad things happen to them. That’s why I liked it and why Ebert didn’t. If the movie didn’t work he would’ve given it one star. Because it did he gave it zero.

But horror is like Jason Voorhees. No matter how many times you chop it up and sink it to the bottom of the lake there’s always gonna be some electrical accident that will shock it back to life. In just over ten years horror has gone from non-existent to the teen slasher whodunits inspired by Scream to Blair Witch Project to the PG-13 ghost movies inspired by The Ring and to the hard-R murder and torture movies like Saw that are a reaction to the PG-13 ghost movies.

Sooner or later the Saw cycle will fade away and some other one will grow in its place. Nothing that you write in your column or complain about on a message board will change this. The Texas Chain Saw Massacre is still with us because it’s a great movie. Others don’t fair as well, because they’re not as good. So don’t worry about it.

Remember 2 Live Crew? They were banned, censored, prosecuted, protested. Every step the parents groups and overreaching law enforcers took only made them more popular and kept them in the spotlight longer. The only thing that could kill them was the suckiness of their music. The second people got tired of being outraged there was nothing left. Their moronic, mumbled rhymes collapsed and were crushed to death by the thunderous bass thumps of those cheesy Miami drum machines.

What I’m saying is just forget about it. If, like you say, these movies are nothing but torture porn, then you have absolutely nothing to worry about. In that case the shock value will soon suffer from inflation and the movies will fade away. It’s only if you’re wrong – if you don’t know what you’re talking about and the movies have merit – that they will last. Like The Texas Chain Saw Massacre, like The Exorcist, like the Beatles haircuts, the King’s pelvic thrusts, electric guitars and hip hop. Either way, what’s the point of getting hysterical? You’re not helping anybody. You’re just making a Shales of yourself.

This entry was posted on Thursday, October 25th, 2007 at 6:58 am and is filed under Other Sites, Vern Tells It Like It Is. You can follow any responses to this entry through the RSS 2.0 feed. You can skip to the end and leave a response. Pinging is currently not allowed.