Vern goes mano a mano with Seagal and goes deep INTO THE SUN!!

Ahoy, squirts! Quint here, on the dawning of a new year with probably the most important story of 2004… That’s right… Our man Vern has an unhealthy addiction. Some like crack, some like weed, some like opium. Vern likes Steven Seagal. I don’t pretend to understand, just like I don’t pretend to understand ether addicts, but hey… someone’s gotta keep the love torch going for Seagal and Vern’s just the man to do it! I doubt I will ever willingly and knowingly watch another Seagal movie, but if I do this might very well be the one… Seagal singing? Seagal’s Angels? Released on my Birthday? Signs are lining up and if they click into place I will not be able to resist! Enjoy Vern’s man-love for Seagal! I know I did!!!

It’s been a while since I wrote anything for The Ain’t It Cool News. But the time has arrived. Once or twice, maybe three or four times a year, however often it is that Steven Seagal comes out with a new straight to video picture, it is my sworn duty to give you boys a holler. As you know I am one of North America’s leading Seagalogists, and I have found that your place is a good forum for sharing my initial findings as the new works are rolled out for study. 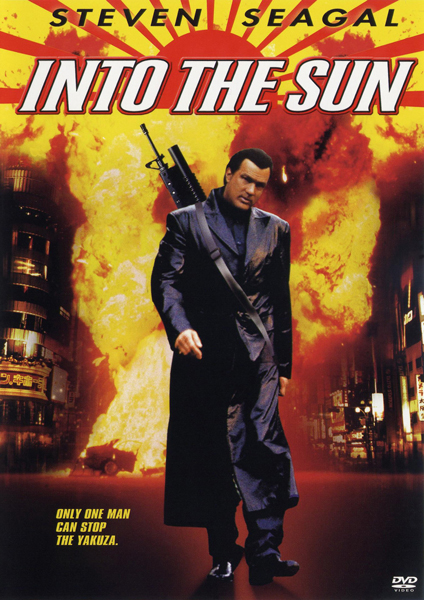 The new one coming February 15th is INTO THE SUN, a Yakuza thriller set in Japan, which is often a good place for Yakuza thrillers in my opinion. This is by no means a comeback for Seagal (he’s been here for years, etc.) but it does have a couple things that make it rise above the recent batch of OUT OF REACH, OUT FOR A KILL, and THE FOREIGNER (also BELLY OF THE BEAST but I won’t lump that in since it’s probaly the craziest and most entertaining of them):

That’s the good news. The bad news is because it’s a little less shitty it’s also a little less fun. It’s not a genuinely good b-movie like OUT FOR JUSTICE or something so you almost wish it had more of the ridiculous shit. And the movie takes its sweet time getting to the action. Most of it seems to be repetitive scenes of the Yakuza executing their rivals or Seagal meeting with somebody to ask them if they can find out information for him. So you really wish there’d be something really retarded like flying across the world because he senses his pen pal has been sold into white slavery (OUT OF REACH) or fighting acrobatic wire fu guys by standing in one spot and waiting until they get close enough to punch (BELLY OF THE BEAST) or playing an international art thief turned Yale professor of Chinese archaeology (OUT FOR A KILL).

But it’s not that type of movie. This one has a more down to earth but hard to follow plot involving a Japanese governor who gets assassinated by the Yakuza and Tongs working together. It’s about drugs but the Department of Homeland Security thinks it’s about terrorism so naturally they have the FBI call the CIA to have their best Yakuza expert investigate. I don’t get it either but the point is, the expert is Seagal. All he really does to investigate is look at a video and ask a couple people if they know anything, but coincidentally he bumps into a young Yakuza on the street and gets into a fight, beating them all senseless. Next thing you know the poor kid has to cut off his pinky as a “token of regret” and the bad guys are worried about this “American who grew up in Japan… apparently he is a sword master.”

I’m glad he’s using swords more than guns now, because his current size works better with the samurai image. He still has that weird Dracula wig widow’s peak, and in one scene he takes it to the next level by wearing what looks like a Nosferatu jacket. Otherwise the fashion is pretty subdued (no beads or shiny blouses).

I should mention also, whoever wrote the text for the box says Seagal is an “ex-CIA agent,” which was a safe bet. But he’s actually a current CIA agent in this one, believe it or not. They switched it up on us, almost like a whole new Seagal. The character’s name is Travis, so some Seagalogists may argue that it is a prequel to EXECUTIVE DECISION, and the character later loses weight, joins the military and dies heroically trying to climb onto a plane. But I don’t know if the name “Travis” is really significant because everybody seems to call him different things, including “Dai-Ryu,” “Master,” “Travis-san” and even “Big Papa.”

The story includes many of the usual themes of Yakuza movies, so Big Papa meets with a friendly old school Yakuza boss who talks about rules and how these young punks are ruining everything with their lack of honor and their working with Chinese people. The good Yakuza are old guys who are traditionalists and are really into robes and rituals and crap. The bad ones are young kids with spikey hair who drink out of bottles instead of bowls, play violent video games and have one of those robotic dogs. They make fun of the idea of a guy using a sword in this day and age but as soon as Big Papa unsheathes it seems like everybody he runs into has a sword on them. So I guess these kids are out of touch, swords are actually very popular these days.

My new year’s resolution by the way is A Commitment To Excellence. That means I’m trying to do a real good job of everything. So if you have noticed that this review is of a very high quality, that is why. Anyway, the one really standout bit of ridiculousness is the romantic subplot with Nayako (Kanako Yamaguchi), who looks about the same age as Seagal’s daughter. The first time you see her she’s just some acquaintance of his, a CIA informant he tells to ask around about who assassinated the governor. The second time you see her he’s checking up on her info and they call each other “my darling” and you start to wonder wait a minute, what’s going on here? Then in her third scene they’re sitting in the park and in less than a minute they reveal that they are secretly in love with each other, decide to get married and quit the CIA. Then comes the most clumsy and chaste sex scene you can imagine. She takes off her top and they hug, then kiss. I think even Seagal felt uncomfortable with this scene. He looks like he’s kissing a frog.

Shot in Japan, weirdly non-sexual romance between old man and young pretty woman… maybe this was supposed to be his version of LOST IN TRANSLATION, I don’t know. Of course the ending is a little different. Women in movies gotta realize, you get engaged to Steve Seagal and you’re on deadly ground, marked for death without necessarily being hard to kill.

But unlike all those movies I just cleverly mentioned in one completely natural sentence, INTO THE SUN is pretty boring until the end. Then it turns into a bunch of sword fights and that’s when all the good dialogue comes in, usually in subtitled Japanese. When Big Papa pulls out a sword he says in Japanese, “This one is so sharp. I’ll use it tonight. This kills very well.” When he finds the guy who killed his fiancee he says, “I shall beat you to death!” and then bludgeons the guy with the blade of the sword instead of chopping him. One of his sidekicks arguably gets the best one though: “I couldn’t sleep well knowing I hadn’t chopped off your balls yet.” (Unfortunately he does not get to chop off the guy’s balls. Sorry.)

And after the story is wrapped up mink and company have a sudden burst of imagination so they tag on a weird scene with Jewel and her FBI team. A van marked “Fast Beautiful Inc.” pulls up to the temple where Big Papa just slaughtered all the gangsters, they run in and paint everything (bodies, weapons, walls) bright blue. Man, I don’t get it but the first two thirds of the movie coulda used more stuff like that.

In the end I’m not sure what was really accomplished. Big Papa does wipe out the young generation of Yakuzas, but the old ones are still there, the governor is still dead, Big Papa’s fiancee is dead, he’s still in the CIA, his white FBI partner who I didn’t mention in this review is dead, Homeland Security probaly still thinks it was terrorists, the blue paint is probaly harmful to the environment, no cars have been blown up and Gogo Yubari still doesn’t have a line. When will this madness end? We gotta stop all this fighting and nonsense, people.

In conclusion, this one is more competent than we usually get from Seagal’s straight to video pictures. But maybe too competent.

Well everybody, thanks for joining me, and we’ll see you again soon. And repeatedly. So far the IMDB lists four Seagal movies for 2005. And there’s a whole 12 months for his schedule to really kick into gear.

A Commitment to Excellence in 2005

DTV mink Seagalogy Steven Seagal
This entry was posted on Friday, December 31st, 2004 at 6:24 am and is filed under Action, AICN, Reviews, Seagal. You can follow any responses to this entry through the RSS 2.0 feed. You can skip to the end and leave a response. Pinging is currently not allowed.