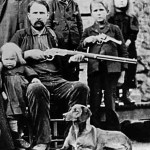 Well you and I, we’re walking the clean path. But we’re kind of the same way with movies. Depending on the movie you want it to be a different situation – sit in a different part of a theater, see it with friends or alone, see it with a big crowd or early in the morning so there’s nobody there. If it’s a sequel, do you rewatch the original first or keep it distant in your mind? I had to make these type of decisions for THE GRUDGE because it’s a remake of this japanese horror movie I’ve been meaning to see for a while. Nobody probaly remembers this but I was the first one to review RINGU and RINGU 2 over there on The Ain’t It Cool News and the first one to report it was being remade as THE RING. And then I reviewed that remake too when they made it.

This time I decided to go the opposite route, I did NOT watch the original (called JU-ON or JU-ON: THE GRUDGE) first. Just to mix things up. I mean who knows what will happen. I’m flying blind here. Dude.

I don’t know about JU–ON but THE GRUDGE is the story of a spooky haunted house type deal in Japan. It’s this place where there’s an old lady who can’t really talk and has to have a nurse take care of her. But then some wacko spooky ghost shit happens or something like that, so her nurse Yoko gets sucked up into a closet. Also, Bill Pullman jumped off a balcony earlier. So Sarah M. Gellar goes to replace Yoko as the nurse, but there’s a spooky little boy running around making cat noises. Also some other gal, I forget who she was or what happened to her but it was some kind of spooky shit. That’s pretty much what it all boils down to I guess is a bunch of spooky shit happens in this movie. Some people die, some people just get real scared, etc. It is PG-13 but one character still manages to get her chin ripped off, that was pretty good.

Now, this is kind of weird because it’s a remake of a Japanese movie but they tried to stay faithful. So they kept the same director, kept the same actors playing the ghosts, kept the story in Japan. But they threw in a bunch of american actors so it gets kind of weird. You got all these white people living and working in japan. But they hardly ever speak Japanese and they answer their phone “hello.” In horror movies in the ’80s, they always found out that some murder or suicide happened in their house or neighborhood by going to the library and looking at news articles on microfiche. Now it’s the internet. Just google your house I guess, you will find an article about the murder that took place there, with photos. And even in this movie, you can be in Japan and look up your neighborhood, you’ll find detailed English language articles about the horrible murder that happened there. They’re doing a good job on the internet I guess, putting all kinds of information on there, in case anybody needs to look it up.

Like THE RING there’s lots of quiet scenes in this movie, with hushed conversations and no intrusive music. On the other hand, every time they want you to get scared they start pushing you up against the wall with a flood of squealy violins. One of the producers is Mr. Sam Raimi so I’m gonna assume it wasn’t him, but some asshole musta been giving the japanese director a hard time. “Look here japanese guy, I don’t know how you do things over there but here in the U.S. of A. we like our horror LOUD. If it’s gonna be scary it’s gonna be fuckin loud and if it’s gonna be fuckin loud it’s gonna be scary. We don’t know to be scared unless the violins tell us it’s a scary part so fer cryin out loud quit whinin and throw on the god damn violins before I fire you and replace you with the guy who did HALLOWEEN RESURRECTION.”

Or maybe they do that in Japan too, but the point is it doesn’t work. You’re telling me it’s scary so much that it makes me think no, it’s really not that scary. You’re overselling it, boys.

And I gotta lodge another complaint here: the first big scare they have is a fuckin cat jumping out. Do we really need that? How many fucking times we gonna have a cat jump out and scare somebody in a horror movie? Can we come together, Americans and Japanese, hold hands and agree as citizens of the world that we are done with that one? I think we can do it. I don’t know, if Bush gets re-elected it might be a setback but I think regardless, we can get through this.

It’s hard not to compare this one to the RING movies. I don’t know if JU-ON is a rip off of RINGU or if it’s just a japanese cultural ghost story type deal, but there are many similar motifs. You got your unstoppable curse dating back to horrible family trauma. You got your flickery spooky black and white videotape of scary apparitions. You got your scary little kid haunting everybody. You got your weird mysterious noise phone calls. You got your creepy discovery when looking at ordinary household photographs. I mean these can’t all be coincidence. Due to these reasons I got no choice to compare these movies and I must come to the conclusion that THE GRUDGE is no RINGU or RINGU 2 or THE RING. The story and characters are not as compelling. There is not as much of a drive to the story, it seems more like an arbitrary series of spooky shit instead of escalating spooky shit building towards one giant spooky shit blowout. In the RING movies you got your 7 day curse and they gotta figure out how to stop it before the 7 days is up and they die. Here, all you gotta do is not go to this particular house. Maybe they should’ve had that on the internet: “don’t go in this particular house, unless you enjoy spooky shit.” Then everybody would be safe.

I wanna say one thing about the opening scene. I already told you Bill Pullman jumps off a balcony. It’s the first scene, he’s standing out there deep in thought and his wife is waking up. She starts saying something to him, but he doesn’t respond, all the sudden he does a weird snake move over the rail and goes kersplat on the street. Japanese people run down the block to look at the carnage and it cuts to Sam Raimi’s credit.

The kids in the theater thought this was hilarious, but I thought it was a good opening. However I gotta admit I was disappointed halfway or more into the movie when the character showed up again in flashbacks and ghostly business. If Bill Pullman had taken the part of ONLY doing the balcony jump, he woulda been my god damn hero. But no, he has to have actual lines and scenes and crap. Oh well. I guess we live in a world with no heroes.

Before I finish up here, a quick note for the douchebags at the MPAA. Alot of times a horror movie is rated-R, it’s some Jason movie or something, people getting shot with spearguns and their eyeballs squeezed out of their heads and that kind of business. In that case you don’t always mind a bunch of yahoos whoopin and hollerin and cheering on the horrible murders, etc. But in this genre of the eerie but not gorey ghost related american remake of popular Japanese horror movie, it’s all about atmosphere. But it’s PG-13 so you get a bunch of 13-16 year old kids giggling and socializing and making phone calls during the movie and you REALLY don’t want that.

What I’m trying to say, MPAA, is fuck you. Send the little girls to the Jason movies where it doesn’t matter that they won’t shut up because you can’t hear them over the yahoos. You better figure this out quick, MPAA. ‘Cause this lack of accountability shit in the US can’t last forever. One of these days you know people who fuck up are gonna start being held accountable again. And you’re gonna have to answer to being the douchebags who fucked up all the horror movies.

Anyway, I did think this movie had alot of good creepy imagery in it and some good ideas. It just isn’t put together all that masterfully. When Sarah M. Gellar discovers some fingers in her hair while she’s in the shower, that’s some spooky ass shit. But then they’re gone and the movie goes on like nothing happened and what have we accomplished? Oh well, I at least gotta commend THE GRUDGE for not feeling like a typical american horror movie. I knew for sure it had a japanese feel when the movie ended and some pissed off kid behind me said, “That was the shittiest movie I’ve ever seen in my life!” If it had been any generic mediocre hollywood movie, he would’ve said it sucked. But he fucking HATED it. It was the SHITTIEST movie he’d ever seen. It was like when I saw the american remake of THE RING, some young fella was so confused by the ending that he yelled “that’s BULLSHIT!” and punched the seat in front of him. Same aggression here and this time from a real japanese director. Good job, japanese director.

Bill Pullman Sarah Michelle Gellar Takashi Shimizu William Mapother
This entry was posted on Sunday, October 24th, 2004 at 12:53 pm and is filed under Horror, Mystery, Reviews, Thriller. You can follow any responses to this entry through the RSS 2.0 feed. You can skip to the end and leave a response. Pinging is currently not allowed.