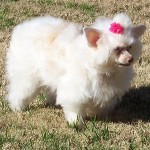 What this is about is hard to explain. It’s a cartoon about a professor who creates these three little girls. They have super powers to fly and shoot lasers out of their eyes and basically anything that pussy Superman can do. Only they have big round heads, giant eyes, and no fingers. And the professor is all made out of squares. At the same time he creates them in a laboratory accident he doesn’t know he also gives his pet monkey a giant brain. The monkey goes off to live in exile, plotting his revenge which involves monkeys and robots. Then there is fighting. 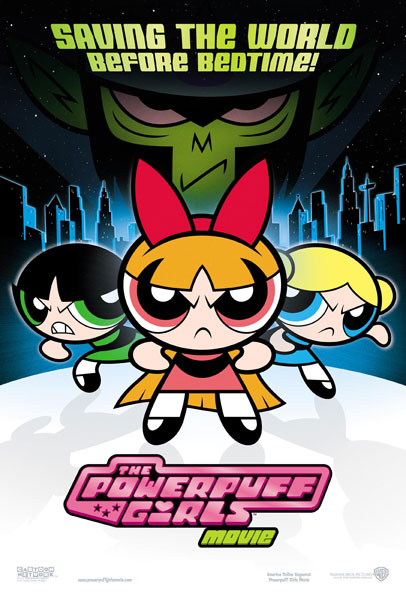 You can tell this is one of those cartoons that’s made by animators. I mean I guess by definition all cartoons are made by animators but give me a fuckin minute here man, jesus. I can explain. No need to get all worked up there bud. Give me the benefit of the doubt. etc. What I mean by that is, this is not a cartoon like “doug” or “arnold” or “thornberry movie” or “rugrats” or “stuart little” or “etc.” where they get a deal to make a movie, they don’t really know what they want exactly but they make some storyboards and then the animators are hired and they are happy to have a job on this as a stepping stone to actually getting a good job some day. The creative visions behind this are obviously full of passion and ingenuity and are clever artists, so most of the humor comes out of really good stylish drawings and ridiculous images like giant baboon robots shooting bombs out of their asses, or three cute little girls destroying the entire city while playing tag.

This is a cartoon style I have never seen in a movie before, very angular, cute designs with big thick outlines, and then it is incredibly violent so it borrows japanese anime techniques to pump up the adrenaline. I guess the tv show is what they call “the limited animation” invented as a deliberate stylistic device by the United Something that stars with P Animation company long ago and then given a bad reputation when it was taken on by Hanna Barbera as a lazy way to make tv shows. The movie uses that style to full advantage but also adds in shit I’m sure they don’t do in the tv like dramatic pans through the city, some fancy special effects and ridiculously detailed scenes like where hundreds of limp monkeys rain out of the sky. There are lots of monkeys in this picture which should help make it popular. Young people think monkeys are funny for some reason.

I believe this is a movie made for the little kids who say the names of all the characters when they come on the screen, for college kids and for the adults who come in by themselves, like me, and somebody thinks what is that guy doing here, is he a child molester. I’m not sure if it’s for the parents though because they mean it when they say it is “rated PG for non-stop kinetic cartoon action” and I’m not sure if most moms and dads will be happy that they solve all their problems by brutally killing hundreds, maybe thousands of monkeys, some of them cute. Although to be fair this probaly is not something most kids have the chance to re-enact. Except maybe Michael Jackson’s kids could do a smaller, more intimate version of some of the scenes, substituting a llama for the gorilla.

This entry was posted on Thursday, July 4th, 2002 at 11:58 am and is filed under Action, Cartoons and Shit, Comedy/Laffs, Family, Reviews. You can follow any responses to this entry through the RSS 2.0 feed. You can skip to the end and leave a response. Pinging is currently not allowed.

27 Responses to “The Powerpuff Girls”