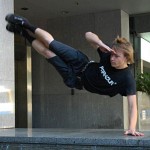 So Luc Besson found out about them and decided to make a movie showcasing their talents. This is kinda what Besson does if you think about it. I haven’t seen KISS OF THE DRAGON yet but that was his attempt to make a better English language Jet Li vehicle than ROMEO MUST DIET. FIFTH ELEMENT was a vehicle for the detailed sci-fi world he had created when he was in boarding school. And what was THE MESSENGER if not a vehicle for his lolita bride of the time, Milla Jovovich, who he manages to make look stunning even with a pageboy haircut and splattered with blood and dirt. Now he’s doing the same thing but for some guys who run around and jump off things and what not. 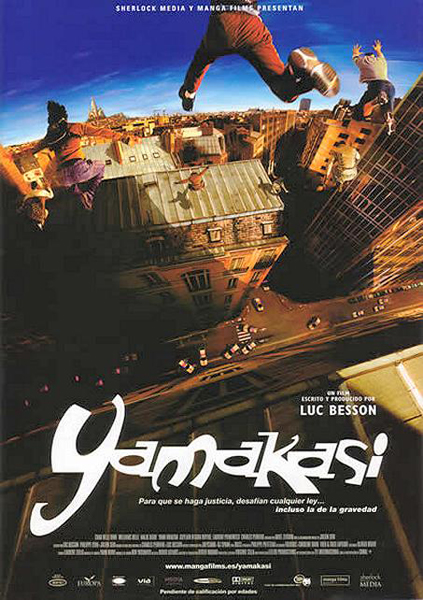 So I’m not clear if these really are the real Yamakasi or not, but the story is about 7 dudes of different nationalities. They are very white bread multi-cultural – you got the asian guy, the other guys, etc. All very hunky and most lacking in personality. However they make up for this with their ability to do flips and shit.

Each has an obvious nickname based on their specialty – for example Rocket runs real fast, Baseball throws objects, Spider slides down a rope. They find ridiculous ways for them to use these talents such as when Baseball stops a mugger, who for some reason steals a purse inside a grocery store (instead of shoplifting), by beaning the fucker in the head with a can of peaches or something.

In the opening scene we learn that the Yamakasi are some kind of rebel folk heroes and loved by all children like Santa Clause or Michael Jackson (in his videos only, not real life). They are so worried about children imitating their stunts that they only climb at dawn. They climb up the side of a building like Spiderman and then huge squads of police arrive to chase them and fail to catch them.

But kids are getting up early to watch their exploits and the next thing you know some brat with a heart condition falls out a tree. This is why the Yamakasi (who compare themselves to the 7 Samurai by the way I shoulda mentioned that earlier I guess) decide to use their flipping and climbing powers to rob a list of greedy doctors to raise the funds to get the kid a black market heart transplant.

Meanwhile there is a cop who is friends with them but blames them for the kid’s accident. He tries to go the straight route to get the kid a heart but like John Q before him he finds it’s a bunch of fuckin red tape, man. Still he tries to foil the Yamakasi’s flippy, acrobatty type robberies. Because he believes in following the rules, blah blah blah.

You can pretty much guess what happens. For example they jump off of the stuff, the dogs chase them, they hang on stuff, jump, flip, etc. Also running.

You gotta hand it to the french also this is a true multi-cultural cast. At first it seems too intentional but then you realize that these aren’t just different races, they’re all from different countries and they never make a joke of it or even point it out. Also the cop character is half arab which you NEVER see in an american movie that is not about arab terrorists. And even then he’s only the sidekick.

This is not directed as stylishly as a real Luc Besson movie (he just Wrote it and produced it) and it’s not as good as the TAXI movie which he did the same thing for. But it’s a slick, stupid little, you know, flipping people movie. If you like flipping you will like it okay in my opinion.

Besson productions parkour
This entry was posted on Tuesday, January 1st, 2002 at 2:19 pm and is filed under Action, Crime, Reviews. You can follow any responses to this entry through the RSS 2.0 feed. You can skip to the end and leave a response. Pinging is currently not allowed.