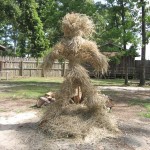 Rudy plays Petey Wheatstraw, a famous comedian and rhyming Badass much like Dolemite without the criminal record. In the introduction he is a godlike narrator in some netherworld rhyming about all the great things he can do because he’s the devil’s son in law. Then it shows him being born on a stormy night. First thing he does is bite the doctor. He comes out looking about 13 years old and beats the doctor’s ass for slapping him.

But then for some reason he is just an ordinary comedian and there is an explanation for how he becomes the devil’s son in law. What happens you see is Petey is putting on a show at the same time that two flamboyant fat businessmen Leroy and Skillet (played by Leroy and Skillet) are putting on their review. Leroy and Skillet are very competitive so they send their thugs after Petey’s friends who are putting up signs to advertise the show. There is a struggle and a little boy, no more than 13 years old, gets shot and killed.

I thought damn, they would NEVER do that kind of shit in a movie these days. Right at the beginning a little kid gets graphically shot and killed. It’s a real downer. Then there is a very sad funeral scene and all the sudden, a car pulls up and the thugs get out and machine gun every last motherfucker at the funeral! Ladies and gentleman we are talking Cinema with balls.

So you see Petey Wheatstraw dies, but because he is such a Badass the devil decides to cut him a deal. If Petey will marry his daughter and give him a grandson, he can return to earth with a magic cane that gives him great powers. Of course Petey is willing to do it – until he sees a picture of the daughter and says, “Hell no, kill me now!”

He ends up taking the deal anyway and his friends are very accepting about this whole devil business. He tells them don’t worry, I’ll figure out how to get out of marrying his daughter later, right now we have to take care of Leroy and Skillet. That is the type of story we have here, where the magical is commonplace and the heroes are capable of extraordinary feats and can speak in rhyme. Petey Wheatstraw is a legendary figure like Hercules or Paul Bunyan. Later on he pulls a tar baby type trick where he dopes up a wino and makes him a Petey Wheatstraw mask, then sends him to the devil to get married, saying he’s in deep meditation.

There is also many Dolemitical touches. My favorite joke is when Petey is sitting around snapping about how ugly the devil’s daughter is. Then he picks up the phone and starts dialin.

“No need to call him Petey, he know he got an ugly bitch.”

And then there’s a scene where Petey catches a bunch of junkies stripping his car. He chases them, rhymes at them, beats their asses, then forces them to put the car back together in front of a large crowd as he recites a poem about how “if they do it to me, they’ll do it to you, so put your foot up they ass the next time they do.” His karate seems better than I remember it being in Dolemite, and as always his rhyming is top notch. He has a great, deep voice where he can even say some shit like, “I’ll give them an opening they’ll NEVER forget!” and do it with so much conviction it sounds like the baddest thing anybody ever said ever.

There are some groanworthy type jokes in this, and too many watermelon jokes, but I think alot of motherfuckers would enjoy this, a high quality picture from the blaxploitation genre. It’s funny and it’s Badass and it’s worth your time.

The DVD has an audio commentary by Rudy Ray Moore himself. I really admire this because Rudy, like me, is a motherfucker who likes to storm into places where he doesn’t fit in and make room for himself. I mean how many guys have you heard doing audio commentary tracks and during an action scene they say, “Watch me as I put my foot up this mothafucka’s ass.” I don’t think I’ll be hearing that again for a while.

That said, this is still a terrible commentary in my opinion because Rudy is such a minimalist these days. I think he does a little more commentary than he has screen time in Shaolin Dolemite, but not by much. I mean there are fifteen, twenty minute stretches where he doesn’t say shit. And then he’ll pop in just to say, “DVD lovers, back it up and watch it again,” after a part he thinks is funny.

But when he does talk there is some priceless shit, he does some toasts and talks about what a genius he is (“I’m not conceited, I’m just convinced of my greatness”). The man still has it, he just prefers to use it in spurts.

blaxploitation Rudy Ray Moore
This entry was posted on Tuesday, January 1st, 2002 at 11:33 am and is filed under Comedy/Laffs, Fantasy/Swords, Reviews. You can follow any responses to this entry through the RSS 2.0 feed. You can skip to the end and leave a response. Pinging is currently not allowed.