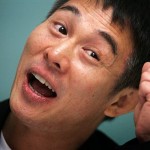 No, my father is not a hero, but that is the name of the movie so in my opinion I had no choice but to write it. The truth is my father was an abusive drunk and a loser* and he is where I get many of my qualities. Maybe that is why this picture starring Jet Li, 1999 Outlaw Award winner for Black Mask, broke my damn heart. True, it is a karate picture, and there are a couple of really great fighting and shooting action type scenes. However what I loved about this movie was the sentimentality in its story of a young boy. It will make you cry.

More than any other karate picture I have ever seen, this is a sad, sad movie. I mean it will grab you by the nuts and pull your heartstrings. You see, this little boy who is a junior martial arts champion idolizes his father, Jet Li, but he hardly ever sees him. Jet is a caring father and has fun with the boy when he sees him, but he’s still a fuck up. He is off getting in spectacular kicking fights and he is always late. He is late for the martial arts tournament, and then after he gets there he gets in a big fight with some criminals. The boy intervenes and gets declared a hero. But then Jet doesn’t even make it on time to see him get a plaque presented for his heroism. But still, the boy forgives him right away. Because to him at this age he will always be dad, the hero. He can be hurt by what dad does but he won’t realize that his dad is a fuck up.

Isn’t that the way it really is? At that age you always want to think the best of your dad. You only see that cool side of him when he is actually good to you. The time he is gone, or the time he is drunk, you are willing to write off. Nah, that was just the alcohol. He’s really a cool guy, once every two months.

Well the reason Jet is always gone and so secretive, it turns out he is an undercover cop. Even though his wife is sick and dying, it turns out he’s gonna have to leave the mainland for Hong Kong to infiltrate a gang. In order to do this he has to get arrested and then break out of prison, and also kill two dogs! Well needless to say, although word does not spread about the poor dogs, the neighborhood starts spreading some gossip about this boy’s dad being a wanted criminal, or outlaw. There is even a scene where the bullies pick on the boy and his friend Fatty, and they are spelling out words with a bunch of ants. Maybe that is some cultural type thing, I don’t know WHAT the fuck is up with the ants. But it is sad anyway.

Well the mother dies while Jet is gone and here is this poor kid all alone, so what he does, he goes to Hong Kong and tries to track down his dad, who is undercover in this gang of weapons dealer type individuals. It’s hard to explain but it ends up in a situation where Jet has to stand by as the gang he is undercover with beats up his son. And then he pretends to strangle him.

Well shit, this type of karate picture really makes you think about the way we treat each other. Because in this movie, we can see that Jet really cares about his son. But at the same time, WHY THE FUCK doesn’t he do what’s right for him? How can he stand to watch these motherfuckers throw the kid through a table? And then pretend that he’s strangling him and throw the body out with the garbage? Maybe you could argue that it was the only way to save the kid’s life. But then why did he have to be late to all the karate tournaments? And why did he HAVE to take this undercover job, even though wife was DYING? WHAT THE FUCK IS WRONG WITH YOU JET LI!? YOU ARE AN EXCELLENT, EVEN SUPERB FIGHTER, HOWEVER I DO NOT AGREE WITH THE WAY YOU TREAT YOUR FAMILY. ASSHOLE.

I think everybody has something that is important to them. For me, it is Writing about Cinema. For you, maybe it is also Writing about Cinema, or painting, or what not. For pretty much all male leads in movies or hour long tv series, it is being a cop or doctor. I think this movie shows better than most the true damage of neglecting your family in favor of being a cop or doctor, because it is shown through the point of view of the little boy. The poor, poor little boy. I can’t remember the character’s name, but if I had to name him, I would name him Little Vern.

Fortunately, the Cinema has what I like to call “the movie magic.” More often than not things end up the way they ought to instead of the way they really would. Sometimes this type of fantasy ruins a movie, but in this case I think it is the proper way to go. It is like in the old Disney picture, The Parent Trap. In that movie, the kids are able to pull a con which proves to the parents they are still in love and stops the divorce. Maybe this is giving unrealistic hopes to the children of America, or maybe it is giving them the comfort they need in the fantasy world of the movie magic.

Well My Father Is a Hero may be giving unrealistic hopes to young chinese martial arts champions whose fathers are neglectful undercover cops, however I think it is something that gives a smile to our hearts and warms us all, and that ain’t a bad thing in my opinion. Because after so much sadness, death, neglect and separation, the climax of the film reunites father and son to fight together against the bad guys. The guys like me and my dad, who just didn’t give a fuck. And what does every boy dream of if not doing karate with his dad and beating up the bad guys. There is even a part where Jet ties Little Vern to a rope and swings him around so he can kick people. This, my friends, is what Cinema is ABOUT. It is the fucking HEART of Cinema. A truly spectacular fighting sequence which at the same time satisfies the emotional needs of the characters by 1) allowing Jet to reveal his secret life to his son 2) allowing Little Vern to understand that his father really is a hero, as he had always hoped and 3) having a little quality asskicking time for father and son.

The very end is pretty corny but this really is a great picture and I’m afraid to say it but the bitch really bowled me over. This one really got to me guys and it’s not a pretty sight. I will definitely have alot to think about as far as my past and the way it affects me today, the way I handle my relationships etc. I will try to get back to you in this week’s column but if the column comes late or doesn’t come at all, don’t worry about me folks. I am just changing, just learning, just growing. I am doing what it takes to be a true human being and positive individual. And I will be back soon for sure you can count on it guys. thanks guys I never told you this but I love you all I really, really do.

*IMPORTANT NOTE FROM THE FUTURE: That was some in character stuff that I wrote back then and have left in for historical type purposes. But my actual dad was none of those things and did not deserve my slander. Sorry dad!

Anita Mui Corey Yuen Jet Li
This entry was posted on Tuesday, January 1st, 2002 at 8:04 pm and is filed under Action, Martial Arts, Reviews. You can follow any responses to this entry through the RSS 2.0 feed. You can skip to the end and leave a response. Pinging is currently not allowed.

One Response to “My Father Is a Hero”