Okay now look guys. I missed my Monday deadline but there is a legitimate excuse. I spent Sunday night in jail after cracking the ribs of the little prick who smashed my jackolanterns. Now i don’t know how much you guys are into halloween but i think you would agree don’t fuck with a man’s jackolanterns.

I hope nobody was disapointed by my lateness since i did an extra halloween column. So lets face it you motherfuckers can’t complain.
On the other hand you can complain about this week’s column now that its arrived, because i’m going to tell you straight off, this one is going to be shit. I don’t have a movie to Write about so I’m just basically gonna be shooting the shit. And i have a sort of block that prevents me from having something good to Write about. Sorry.

I want to say thanks bud to my fans, i think there are at least ten of them at this point. I have gotten some nice e-mails and my guestbook thing has been signed by some real cool motherfuckers. i even got it signed by the dude who created the comic book that the tv show “harsh realm” is based on. sorry about the show man, i hope reading my sight didn’t jinx you.

At the same time i want to give a big fucking fuck you to the stupid motherfuckers who criticize me in the guestbook. Jesus fucking christ man do you know any manners. this sight is not about relgion so why the fuck you have to blaspheme against my fucking tenets in a man’s own guestbook. I’m not here to talk about religion i am here to talk about the art of Writing and cinema. if you want to pick on people for their religion go to an airport motherfucker. And anyway you should read Vern Tell’s It Like It Is #3 Mambo Socks below if you want to find out what a fucking prick you are for judging a dude without knowing about his life and journey.

Anyway I guess this week is sweeps week on tv which is when they do all the extra sexy shit to try to get higher ratings so they can charge the soap companies more money for the commercials. I am going to try to always watch tv on sweeps week not just for the sexiness (thats what nudie movies is for jackass) but as a scholar of the american popular cultural things and what not.

So far i saw a pretty good one on the lawyer show Alley McBeal. This is the show about a funny chick that is real neervous. There are a lot of people on this show and the ladies in particular get the vern seal of approval. Anyway two ladies kissing is what i’m getting at.
Well anyway i would like you guys to Write to me to let me know what are the best tv shows that you think i should watch. i have heard that walker texas ranger is good but personaly i do not consider that hairy piece of shit chuck norris to be one of the better karate guys. i do not think he’s on the level of a bruce lee or willis. There is one tv show that i have been watching regularly since i got out but i don’t want to say what it is. It was a rerun this week due to it was on halloween but i’m hoping it will be a new one this week. Maybe you can guess what it is but i hope not.

Well shit man this is depressing, i’m going to quit before it gets even worse. Sorry guys i promise a better column next week.
jesus christ man this is horrible.

You know what, on second though i’m going to finally give in and print part of my dream journal for you motherfuckers who requested it. I encourage keeping a dream journal for everyone it helps to understand yourself and give you ideas to keep you always Writing. Well except in this case. now keep in mind i am a very private dude so this is actually pretty fucking stupid for me to do this. But you know what i feel a duty to my buds and i want to fulfill my goal of being a weekly columnist so here it is jack. bet you can’t read all of it. 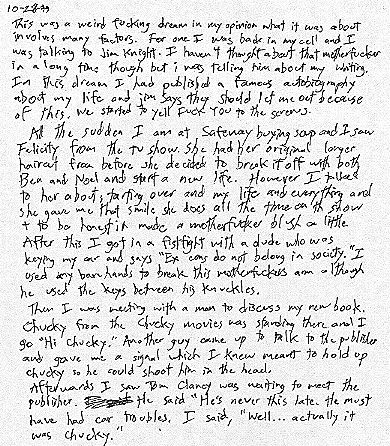 This entry was posted on Wednesday, November 3rd, 1999 at 4:52 am and is filed under Vern Tells It Like It Is. You can follow any responses to this entry through the RSS 2.0 feed. You can skip to the end and leave a response. Pinging is currently not allowed.