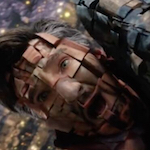 MCU movie #28 with Raimi’s fingerprints all over it is not as good as, say, an original western with Raimi’s fingerprints all over it, let alone an original comic-book-inspired character he made up, but it is, at times, thrilling. MULTIVERSE opens mid-battle as ex-surgeon-turned-ex-Sorcerer-Supreme Stephen Strange (Benedict Cumberbatch, the guy in the dragon costume in THE HOBBIT) and a teenage girl named America Chavez (Xochitl Gomez, SHADOW WOLVES) are super-leaping across chunks of debris floating in space while a tendril-covered demon blocks access to a pedestal holding a magic book called the Book of Vishanti. It’s the good counterpart to the evil Darkhold, which in this context suddenly I realize is the MCU equivalent of the Necronomicon. They’re leap-frogging and parkouring and the camera is deftly moving around them in impossible ways, a natural evolution of all the groundbreaking web-slinging sequences in Raimi’s SPIDER-MAN trilogy. END_OF_DOCUMENT_TOKEN_TO_BE_REPLACED