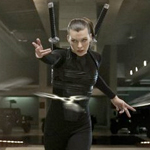 As is the RESIDENT EVIL tradition, the opening is like a short film unto itself. There’s a security breach at the Umbrella Headquarters in Tokyo, which makes The Hive look like the FIRST BLOOD police station by comparison. A small army of security troops surround the elevator waiting for the intruder to emerge, a drawn out sequence playing with our anticipation for what Alice promised at the end of the last one. END_OF_DOCUMENT_TOKEN_TO_BE_REPLACED