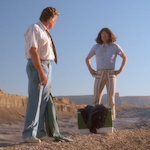 I know I’m way behind on this summer retrospective, still doing May releases well into June, but some new information and my perfection-ish-ism have forced me to skip back a little bit. It turns out there was another lowbrow comedy released in May (approximately May 15th) but in a limited enough capacity that it didn’t show up on any of the lists I used for research. Unlike ENCINO MAN this is one that I did see – more than once – after it came out on video, and it’s a better representation of what I personally was into at the time. But I can’t argue whether it’s better or worse than ENCINO MAN. That is for each individual patron of the arts to decide for themselves. What’s relevant here is that it’s very on brand for Weird Summer. Arguably too much so. END_OF_DOCUMENT_TOKEN_TO_BE_REPLACED