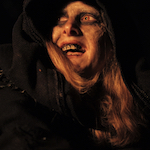 And we gotta give the ol’ Frau this: it takes balls to do the opening kill at a church! A mom is not paying attention to her son, as she talks to the priest after the service, and he follows a trail of candy to the door, where our shadowy robed non-Krampus related hag snatches him up. I like that it’s hard candy, because it shows that Mother Krampus is a grandma at heart. Either that or she’s so devious that she could use any delicious candy and purposely chooses the less good stuff because she knows it’ll do. END_OF_DOCUMENT_TOKEN_TO_BE_REPLACED