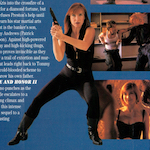 Rothrock is playing Kris Fairchild again, but she might as well be a different character. We first see her sneaking around in all black with gun holsters, wearing a headset and saying “Alpha 1 in position” before battling a bunch of terrorists in creepy Halloween masks. It will turn out to be a training exercise, meaning she has moved on from both of her jobs in part I – high school history teacher and martial arts instructor. Now suddenly she’s some kind of agent and she’s sent to work for a bank in Thailand as part of an investigation. END_OF_DOCUMENT_TOKEN_TO_BE_REPLACED