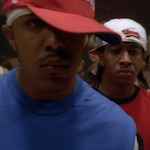 It centers on Elgin (Marques Houston, BEBE’S KIDS, HOUSE PARTY 3) and his best friend David (Omar “Omarion” Grandberry, WRONG SIDE OF TOWN). They and their friends are incredible dancers but sadly they talk about it more as a “way out” than an art or a passion or something they were born to do, even though it must be all of those things. In the opening battle the prize is $600, but I counted at least eight people they have to split it between. I’m sure battling is way better than working an 8 hour shift, but I don’t think you could win enough of these to pay the rent. So David and Elgin reluctantly supplement it by doing deliveries for a drug dealer named Emerald (Michael “Bear” Taliferro, HALF PAST DEAD; later directed STEPPIN’: THE MOVIE). END_OF_DOCUMENT_TOKEN_TO_BE_REPLACED