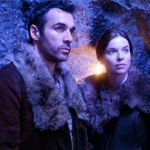 HIGHLANDER: THE SOURCE arrived in 2007 and is – at least for the foreseeable future – the final Highlander movie. It’s the only one that’s about Duncan MacLeod (Adrian Paul) without Connor MacLeod, and therefore the only live action one without Christopher Lambert. It’s filmed in Lithuania with exaggerated digital colors and green screen FX, giving it a cheap but distinct look and feel. It’s not technically post-apocalyptic like the two animated spin-offs, but it does not depict civilization as doing great. The opening tells us “The world has fallen into chaos and decay. There is no law, no justice, only death and destruction. Some say it’s a sign of the coming of the apocalypse, a time that even Immortals fear.” This is illustrated by an alley where some barrels are burning and a guy is getting stabbed. I think another guy is buying drugs (gasp!). END_OF_DOCUMENT_TOKEN_TO_BE_REPLACED