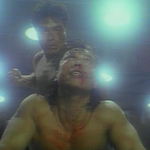 I also thought it might be dubbed, and there’s not any dialogue for the first ten minutes or more, so I was in suspense. Turns out it’s one of the rare Hong Kong movies that was actually filmed in English. Some of the actors sound like they’re just repeating it phonetically, so it’s hard to understand some of it. END_OF_DOCUMENT_TOKEN_TO_BE_REPLACED