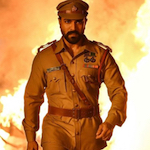 The title reportedly stands for “Rajamouli, Ram Charan, Rama Rao” – the names of the director and stars – though it says “Rise Roar Revolt” on the English language opening credits. Writer/director S.S. Rajamouli’s last movie was BAAHUBALI 2: THE CONCLUSION, which I also heard superlatives about and still want to see. But you know, if I was gonna watch parts 1 and 2 that’s a six hour commitment, so I didn’t get around to it. But I’m so glad I listened to the hype this time, because RRR is incredible! I kept thinking my mask was gonna slip off because I was grinning so wide. END_OF_DOCUMENT_TOKEN_TO_BE_REPLACED