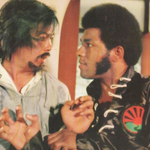 Like Bruce Lee’s greatest victim, Chuck Norris, Van Clief had made his name in competitive martial arts and ran many schools before finding his way into movies. The year after ENTER THE DRAGON he starred in his first movie, and it was called BLACK DRAGON. It’s a nice idea because even if we still had the original Dragon we still might enjoy experiencing a Black Dragon. So he doesn’t so much have to pass as a worthy replacement. It’s a different thing. END_OF_DOCUMENT_TOKEN_TO_BE_REPLACED