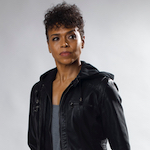 TAKE BACK (2021) is a halfway decent DTV action movie, not a great one. The main thing holding it back, I’d say, is an approach to action similar to a Liam Neeson movie; Gillian White (whose name is listed last on the cover, but she’s the actual star) seems like a badass and has a couple good head kicks and stuff, but they move the camera around like they got something to hide. In one scene she actually turns off the lights and then kills a bunch of guys in the dark, which would be a good gag if there were more parts where we actually did get to see her.

Nevertheless I enjoyed this movie and there are several things that are novel about it. So I am here to praise those things.

Gillian White (“Hey Lover” video by LL Cool J featuring Boyz II Men) plays Zara Roland, a successful lawyer living out in a desert town in the Coachella Valley with her husband Brian (Michael Jai White, “Where I Belong” video by Busta Rhymes featuring Mariah Carey) and stepdaughter Audrey (introducing Priscilla Walker). They’re the kind of couple that celebrates their 4th anniversary by sparring at the dojo where Brian teaches. He holds the pads and Zara punches the hell out of him. END_OF_DOCUMENT_TOKEN_TO_BE_REPLACED