Okay guys, since every conversation lately seems to turn into Batman or Superman, here is a thread to do it without derailing important The Phantom or fighting owls analysis. This could be kind of like the potpourri thread except limited to comic strip movies and what not.

To show that I’m not above it I will comment on the news that set off the recent Superman conversation: that Zack Snyder is on a list of potential directors for the new Superman picture. I thought about it and I think actually Snyder might work well with David S. Goyer, who wrote the script, so I’m for it. Also on the list is David Bowie’s son Duncan Jones, who did MOON. I have no idea if he can pull off a big studio movie, but he seems like the most interesting director on the list.

Also they’re saying Darren Aranofsky now. I’d see that. It could be Matt Reeves (CLOVERFIELD, LET ME IN, co-creator of an old TV show called Felicity). And Jonathan Liebesman (TEXAS CHAINSAW reprequel) most likely based on the alien invasion movie he has coming out, but he’s also supposed to do CLASH OF THE TITANS 2: THE RE-CLASH.

But the rule is they always go with the worst guy on the list, so congratulations to Tony Scott, who will direct the first Superman movie where nobody can tell if the guy is supposed to be flying or not. 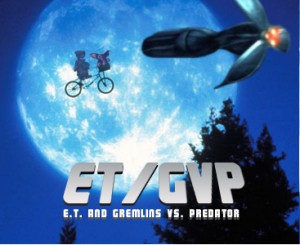 We get alot of good conversations going in the comments about all kinds of random shit. I’ve been thinking maybe I should do some “blog posts” about the nerd news of the day, like today it would be the AVATAR trailer or INGLORIOUZ BASTIRDZ is coming out or whatever and then we could all discuss it. Maybe I’ll start doing that sometimes, maybe I won’t. Nobody knows. But for now here’s a place to comment on whatever you damn well feel like.

I couldn’t find a good picture of the Jeopardy category “POTPOURRI” so instead enjoy this fine ET/GVP poster art.