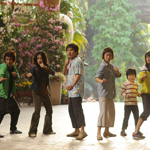 Despite being a Thai production it’s about a Korean family who train and perform Tae Kwon Do. The father has alot of resentment about a loss at the Olympics long ago, just as he had to abandon his dream in order to raise a family. Because of this he puts alot of pressure on his family to train hard, especially his older son, who would rather pursue his dream of STEP UP style dancing. Dad doesn’t even want him to go to a big audition to be a dancer for “Dream Entertainment.” The poor kid has to make a deal to master the impossible “Tornado Kick” to even be allowed to pursue dancing at all. END_OF_DOCUMENT_TOKEN_TO_BE_REPLACED