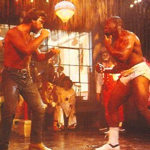 It opens in “HOBO JUNCTION, TENNESSEE, 1989,” where a crowd of hobos gather around a campfire and a kid named Casey, who rips them off in Three-Card Monty (a strange game – the only winning move is not to play). Casey’s hat makes this look so Depression Era I honestly rewound to make sure I read that year right. Yep, it says ’89 all right, but it’s obviously inspired by period pieces. It’s about people who ride the rails and pull petty hustles just to get a little bit of money to get to the next town. END_OF_DOCUMENT_TOKEN_TO_BE_REPLACED