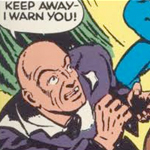 And my instinct was sympathy for the vocal hateful nerd community of the internet. Like “Maybe you guys were right.” As you know, the default internet stance on everything is negative. The nerd community in particular tend to be against most things that exist other than the TV shows Community and Sherlock, most of the Marvel movies (for now, but there will be a vicious backlash in a few years guaranteed) and… bacon I guess. According to the products on the websights, bacon is one of the main things they respect. I’m old fashioned, I don’t think of bacon as something a man puts on his shirt, so alot of times I feel like I’m on the other side from these guys. But for a second when I read this I thought “shit, I know how they feel.” END_OF_DOCUMENT_TOKEN_TO_BE_REPLACED