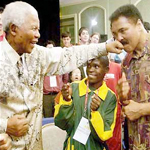 I’m no expert on the topic, I’m sure I know more about the legend of Mandela than the specific historical facts. But living in the world at the same time as him was inspiring and amazing. Going through life for so many years taking for granted the story of the revolutionary jailed for opposing an unjust regime, just knowing him as a cause more than a person, then seeing him not only freed, and the wicked system he fought against ended, but seeing him become their democratically elected leader? Incredible. And then he lived to 95 and died naturally. Not bad. END_OF_DOCUMENT_TOKEN_TO_BE_REPLACED