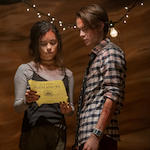 Luckily it’s also funny and gory enough to be a pretty good time. The returns are diminishing, but I’ll take ‘em. END_OF_DOCUMENT_TOKEN_TO_BE_REPLACED