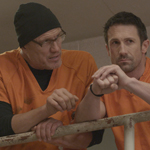 I don’t know, maybe Silva’s supposed to be some undercover guy planted there to help him? Might as well be, it seems like everybody else in here is. Jack purposely pleaded guilty to get into the prison where his wife’s killer is. William, we find out, is an FBI agent who has been inside for 6 months to look into corruption at the prison (talk about a shitty gig!) and he also has a partner in there who is also undercover. END_OF_DOCUMENT_TOKEN_TO_BE_REPLACED