Steven Soderbergh’s take on an action/spy thriller – built around “The Face of Women’s MMA” Gina Carano after he saw her on Strikeforce while flipping channels around – lives up to my high expectations. It’s written by Lem Dobbs and it’s like the kid sister of THE LIMEY, mixing the style of that Soderbergh classic with kind of a more upbeat ex-Marine-badass-operative-betrayed-and-on-the-run type of story. It has THE LIMEY’s sense of quiet, deliberate pace and dread and also its dry you-just-fucked-with-the-wrong-person type of humor. Of course, professional fighter Carano has different strengths as a performer than Terence Stamp does, so her movie has less emotion and more punching, kicking, choking, armbars, heads broken through furniture, foot chases, etc. Gina’s not gonna mourn the loss of the daughter she never knew, and Terence isn’t gonna climb up onto a roof. In my opinion. And it’s great to have both of them. END_OF_DOCUMENT_TOKEN_TO_BE_REPLACED 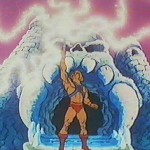 Okay so maybe MUNICH isn’t as true to life as SYRIANA (in fact, some people think the real guy it’s based on made up the whole story and never worked for Mossad) but it sure is a more entertaining movie. Eric Bana (winner of the secret, recently declassified 2001 lead badass outlaw award for CHOPPER) plays Avner, a small time Israeli agent personally chosen by the prime minister to lead a team of assassins to kill 11 people believed to be involved in the planning of the massacre of the Israeli athletes at the Munich Olympics. END_OF_DOCUMENT_TOKEN_TO_BE_REPLACED