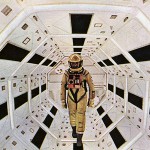 No, don’t worry, I’m just fucking with you. They’re not doing a remake, as far as I know. But you almost believed it, right? Because it’s so awful, so wrong, so undeniably vile, that someone is definitely going to have to do it eventually. They came for Hitchcock and Hooper and Romero and Carpenter and Walking Tall and Amityville Horror and House of Wax and they even tried Billy Jack. They already got Charade and Planet of the Apes and Dr. Seuss. They burrowed into the brains of Lucas and Spielberg and Friedkin and Scott and made them second guess their younger, better selves. And now they’ve got their greedy bastard eyes on Kubrick. You fucking know they do. They’ll wait until his assistant is dead and his assistant’s grandchildren or whatever it takes, but the day it becomes possible, they dig out the contracts and they sign them in blood and they will swallow one end of 2001 and suck it down like one of those threads the yogis use and pull the entire movie out through the ass and into a paper shredder. You already know this, but I’m telling you this, because we need to get this out in the open, for our own good. We need to face the inevitable. END_OF_DOCUMENT_TOKEN_TO_BE_REPLACED