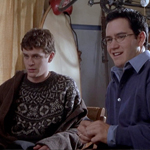 It turns out maybe the comedies that come out in August are not essential to a summer movie retrospective. That’s a lesson I’m learning. I actually saw DEAD MAN ON CAMPUS at the time, but I realize now that I was conflating my memory of it with IDLE HANDS. I knew it was a different movie, but I thought it was another supernatural teen horror comedy. It was about half an hour in before I realized oh shit, he’s not gonna turn into a zombie. This is that movie where they find out their college has an obscure rule that if your roommate commits suicide then they have to give you straight As (just go with it) so they try to find an unstable roommate and push him to the brink. The kind of movie that should just have a disclaimer and a 1-800 number running across the screen throughout like a watermark on a critic’s screener. END_OF_DOCUMENT_TOKEN_TO_BE_REPLACED