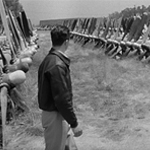 They get home and we follow each of them as they return to their families, try to find jobs, try to make regular life work again. For the most part their loved ones are thrilled to have them back, and will do anything they can to support them. And many people see their medals and treat them as heroes. Al is welcomed back at the bank where he worked, to almost an uncomfortable “we want to show off that we have a veteran on staff” level. Fred not as much. The drugstore has been taken over by a chain who will only hire him back as assistant to his old assistant when he was a soda jerk. END_OF_DOCUMENT_TOKEN_TO_BE_REPLACED