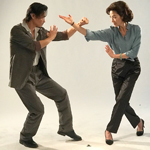 In the tradition of UNDISPUTED II and III, MASTER Z takes the antagonist from the previous film and makes him the hero. Max Zhang (the main henchman from KILL ZONE 2) returns as Cheung Tin Chi, which I guess must sometimes be translated as Zheung, otherwise I have no idea why this is called MASTER Z. He was a younger teacher who defeated the great Wing Chun Grandmaster Ip Man in a public challenge, became legendary himself, but got too big for his britches and was ultimately defeated in a private challenge. Now he’s left martial arts – including turning down what could be well paying gigs as an enforcer – and runs a small grocery store. END_OF_DOCUMENT_TOKEN_TO_BE_REPLACED