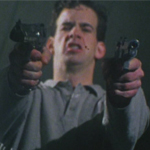 RAISING HEROES is about a couple, Josh (Troy Sostillio) and Paul (Henry White), in the midst of a custody battle. Paul’s best friend died of cancer and wanted the two to raise her young son Nicky, but the kid’s grandmother and homophobic case workers are trying to stop that from happening. Then, a few days before a crucial hearing, Josh witnesses a mobster named Victor (Edmond Sorel, also co-writer) executing a guy in a convenience store, and various gangsters spend the next few days following and trying to eliminate him. END_OF_DOCUMENT_TOKEN_TO_BE_REPLACED