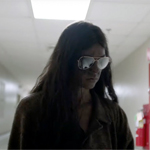 Now The Woman is back in DARLIN’, released today on blu-ray and dvd. It’s another interesting standalone story and it’s written and directed by McIntosh herself. There are some funny behind the scenes shots in the extras with her directing in full costume or in civilian clothes but caked in dirt makeup. END_OF_DOCUMENT_TOKEN_TO_BE_REPLACED