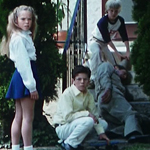 But there’s not some unseen slasher, or masked maniac, or supernatural force. There’s just three little ten year old kids who are total assholes and love to murder people. They are not quiet, creepy killers like VILLAGE OF THE DAMNED, CHILDREN OF THE CORN or young Michael Myers. They’re seemingly normal kids. The only explanation given is that they were born on the same day, during an eclipse. The Final Girl Joyce (Lori Lethin from RETURN TO HORROR HIGH) studies astrology throughout the movie, so you assume it has something to do with that. They were just destined to go on a murder spree. And to rack up pretty impressive numbers.
END_OF_DOCUMENT_TOKEN_TO_BE_REPLACED