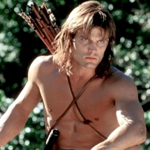 It turns out some of the things I liked about LEGEND’s approach had already been done in this one. LOST CITY begins with Tarzan already a lord and having to return to the jungle and his old ways to help somebody. It also has a respect for the native African characters, showing them as his close friends who he comes to help. And it has bad guys who are arrogant European assholes plundering Africa (although they’re just stealing diamonds, not abusing workers/enslaving people like in LEGEND). They start by stealing from graves, which does not go over well with the locals. END_OF_DOCUMENT_TOKEN_TO_BE_REPLACED